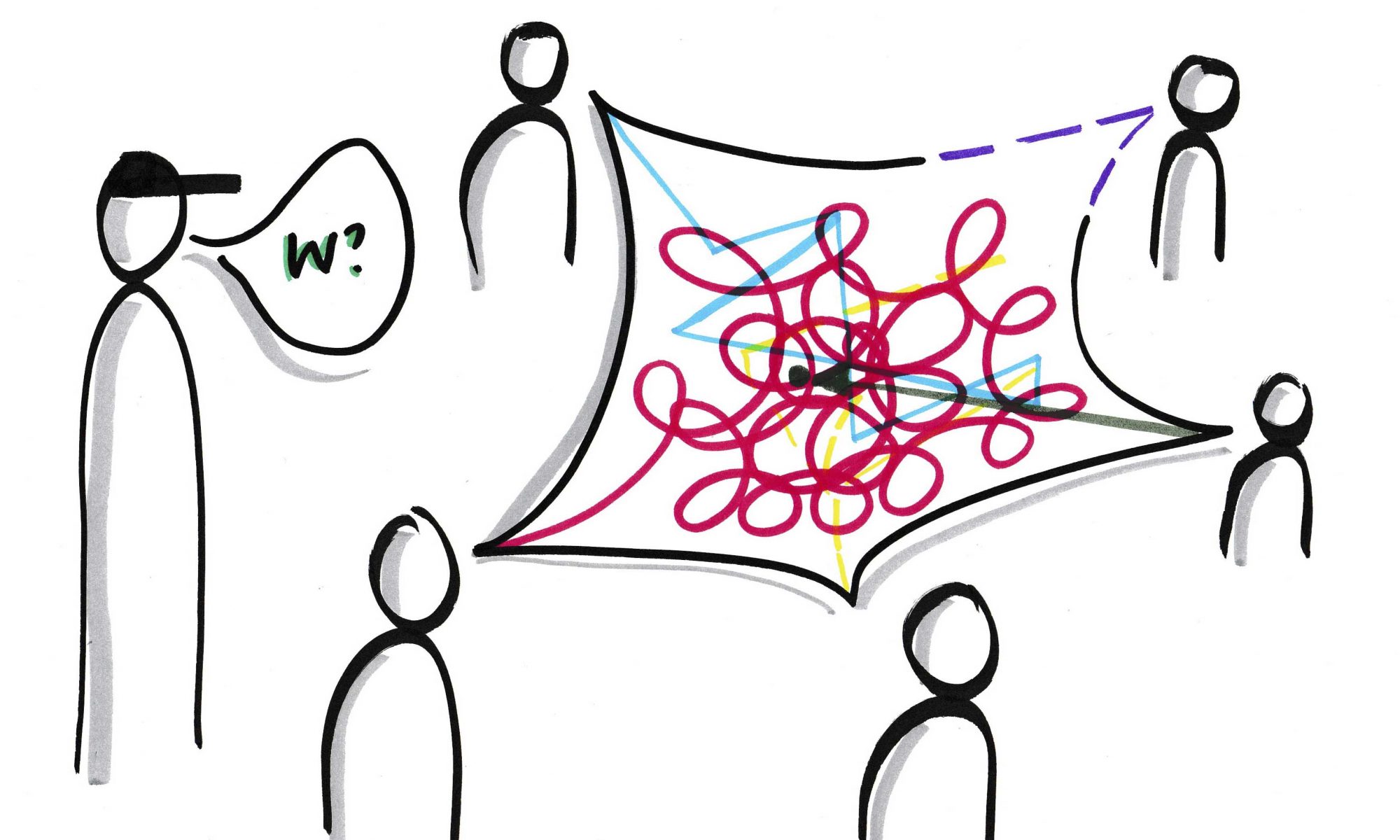 Last week I had the honor to be co-host of a world café at LAS on agile communication. There were about three times as many people as we expected and as happy as that made us: It was a bit too many for the concept of a world café hosted by two persons in an average sized room. Most of our visitors were happy in the end anyway. But some of them asked me, how one could improve communication in actual situations on practical examples.

How people behave in discussions

Here is one now: There is a scrum team with five very different people working together for some months now. They do everything by the book (aka the Scrum Guide). And they haven’t finished the items in the sprint backlog by far during any of the previous sprints. Maybe they are really ambitious or really lazy or just stupid. Or they maybe have a communication problem. Let’s have a look on how they discuss things:

D: What about story 4. We definitely should pull that one, too.

E: Isn’t that a bit too much? We always end up with to much to do.

D: I think we really should start with 5. And wait with 6.

E: I still think that it is to much. Because…

Although the dialog is very constructed for my purposes you probably know real people who talk at least somewhat like that. A is very extroverted and knows what she wants. She probably has in mind how it all should work out and isn’t able to listen to others openly. B on the contrary is very introverted. He doesn’t say much and since there is always someone talking he hasn’t to. C probably is a conflict-avoiding person with low self-initiative. She usually does what she is told by others. D puts himself more in the game. He probably has some factual arguments but can not bring them into the discussion because he is struggling for visibility (and perhaps about leadership) with A. E has got some factual arguments, too, and is willing to present them but fights not enough to getting heard.

Planning Poker as a communication tool

There is a discussion going on about the point of estimating. This article isn’t about that. It focuses simply on how you can make people communicate. And planning poker is one way to do that. You let the team guess the size of a story and then they do discuss their variance. In this discussion they will find out about their different perception on what a story really is about. They will find out about what should or could be included and how to get there.

In our example A probably will find out about the factual basis that worries D and E. B gets to talk about the problems he is facing with his work on the stories 1 and 2. And perhaps even C will have to take up a position. Remember the basics though: Choose a number, put it on the table facing down and only when everyone has chosen a number the cards are turned simultaneously. Else, C probably will chose a card matching the average of the others. The ones with the lowest and highest numbers get to argue for their choices. B and E will get their turn in arguing against A and B. They perhaps will discover that they all understood the stories differently, by talking about the objective rather than the process of pulling stories into the sprint backlog.

Questions and their impact on communication behavior

Still, planning poker isn’t a magical key to make people change their behavior in discussions. So, in addition to some communication ground rules (like for example: only one person speaks at a time and everyone is given time to speak) you might wanna use questions to steer the conversation. This isn’t about the outcome, it’s simply about how to include everyone in the discussion. For a moderator it is crucial to not get and not being involved in the objective of a discussion.

Usually powerful questions, also called open questions like „What?“ or „Why?“, are preferred in coaching contexts: The questions ask for detailed explanations and considerations. As a coach you don’t wanna tell people what to do but you want them to come up with a suitable solution by and for themselves. In the context of a discussion though it might not always be the clever thing to do, since you have all this different types of people there and you want to involve everyone in the discussion similarly.

With open questions you can make someone quiet exploring their thoughts. You have to give them time and perhaps bear some silence before you get the answer. Don’t stop encouraging them to explore their thoughts further. Involve them by calling them explicitly by their name. With closed questions on the other side you can stop an extroverted person who talks often and long. For example you can restrict the answer to a simple „yes“ or „no“: „Do you think you can make it, yes or no?“ You then have to stop this person if they want to explain their answer. You can come back to the answer later and ask very structured questions like: „What is your major reason?“ Again you then have to stop the person if they explore more than one reason in their answer.

In our example you would probably stop A („Ok, let’s hear what others think of that.“) and encourage B („Please tell us about your concerns, B.“). You might wanna challenge C („How do you think we will achieve this?“) and give E some room to argue („Let’s hear what E has to say about that.“). Steering D in this example seems the biggest challenge for me: He is somewhat in between A and E and it’s not gonna be easy to get an equilibrium. You might wanna stop him, if he is fighting with A for leadership (since that isn’t the goal of this discussion) and you might wanna encourage him if he is exploring the cause.

Some guidelines for moderation

If you are the moderator of a discussion you have to be aware of a lot of things, for example:

Support the group then within the discussion. Don’t participate yourself but enable them to communicate so that everyone who has to say something commits to the cause and the team can profit from it.

Every situation is bound to a lot of context and all this context is very specific and changes the way we can successfully communicate. Also, there is no „right“ or „wrong“ way to communicate but rather a more or less adequate way. Try (and fail fast) and inspect and adapt: Take well established communication techniques and adapt them for your situation.

diving into a new quality of collaboration through communication on eye level: purpose – motivation – commitment