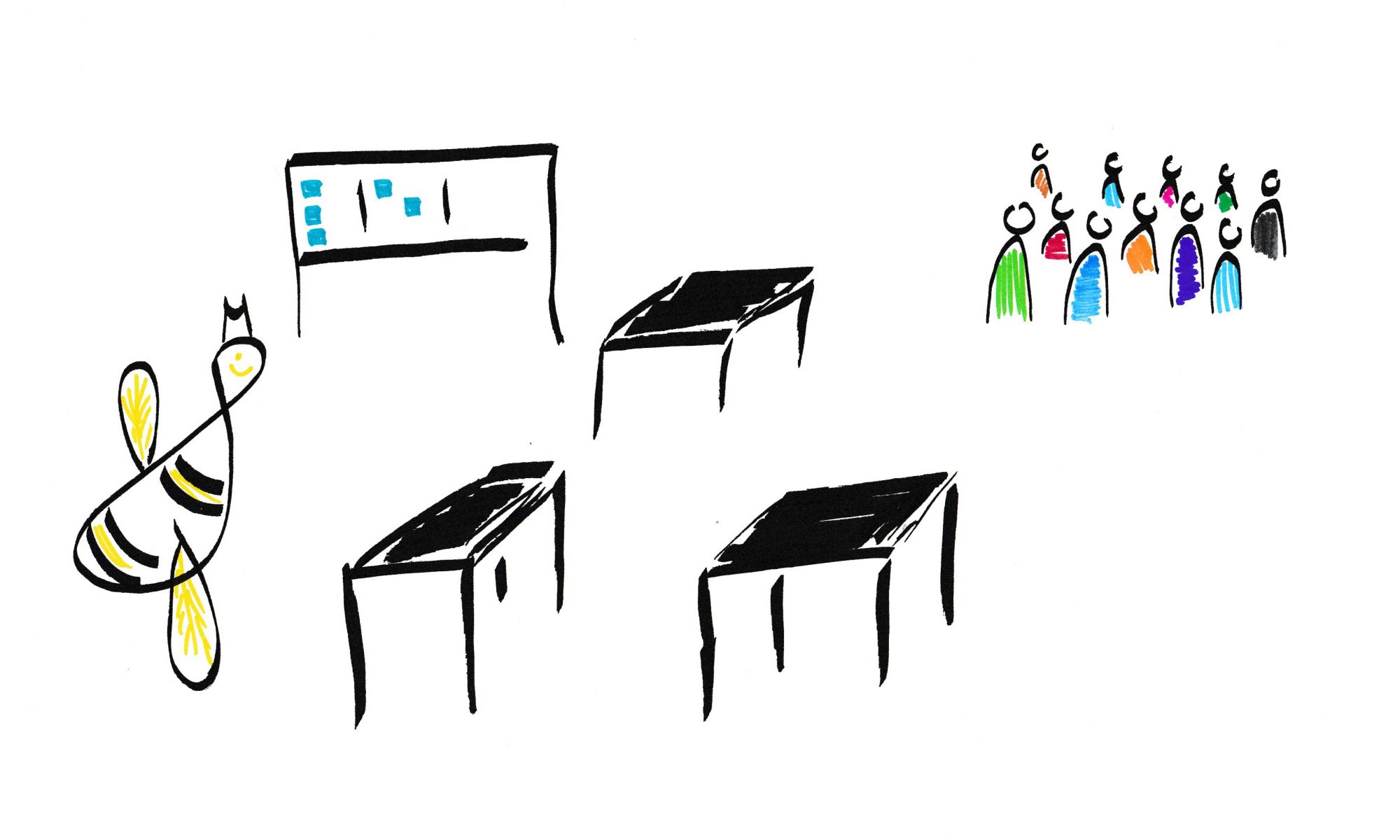 My students at a University of Applied Sciences in economics worked with Scrum for one semester to produce concepts and texts for corporate communication for their fictional companies.

I already wrote here about how I implemented Scrum in my lessons. Now I will write about what the experience was like. Knowing that our students are rather used to classical teaching (with a „teacher“ standing in front and telling them what to do and how to do it) I thought about how the first lesson must be to rip them out of this situation. I went to the room early and started moving the furniture – which wasn’t that easy since the tables are held together with cable holders with sockets for laptops on each seat. Still I was successful and when the students arrived there where three „islands“ of tables.

The students were irritated and tried to sit in the few places at the back where there was one row of tables left. I invited them to the front where I had placed some flip-charts with questions like „How motivated are you to be in this module?“ and „What do you expect it to be like?“. Then I let them take their seats at the three team tables and they had to work on what they wanted to achieve this semester. I think that although they somehow found it to be fun it was also hard for them and it was certainly hard for me not to become a teacher (a problem I fight with every lesson). But finally they had some goals and some perspectives that motivated them.

I introduced the Scrum framework to them, they decided on a fictional company and started to work. Each sprint planning I handed them over some user stories and they decided which one and how many they could do during the sprint. The first two sprints they improved their self-organization and increased their performance dramatically. This wasn’t about self-organization per se – they have to self-organize all the time, since they have to do a lot of papers in teams – but about whether I truly let them do the work their way and wouldn’t turn on them in the sprint review. After I won their trust over it went smoothly.

Giving up control and trust

There was one team that had set as their goal to be present as little as possible. At first it occurred to me that I should have set the framework in order to that the teams must be present during the lessons. But it was too late then and I didn’t want to change the rules just because they wanted to self-organize in a way that didn’t please me. So I went with it: I gave up control. And it turned out to be the right thing: They worked together with online-tools and for about a third of the lessons this team didn’t come to the classroom but usually one or another showed up towards the end of the lesson bringing round some texts they had written to discuss with me whether they meet the Definition of Done. And they all attended the Sprint Reviews and Retrospectives. As they trusted me that I wouldn’t change the rules I trusted them that they did the work and meet the Sprint Goal (that for this team also comprised to be present as little as possible and to do as little work as possible but still deliver a high-quality product).

All in all I think that what they achieved and produced this semester was more and in higher quality than when I did these lessons in a more classical way. They knew the criteria for their texts before, but working with the Definition of Done somehow let them be more responsible and also they let check their own texts by someone else more often. They were far more creative: They stuck to their company and they thought of everything they worked out in previous sprints. They discussed their issues in the team and got far further than in similar discussions I witnessed in previous semesters. Sitting in teams (on the „island-tables“) and having transparency on their boards sure helped a lot. It was visible who belonged to which team and they could easily talk since they all were in sight of each other. It was clear what their assignment was and who needed help.

At the beginning they wrote texts as they are used to. I gave them the possibility to create other stuff and it took a while until they tried that out too. But in the end we had also sketches, schemes and videos (explainer videos, where on a neutral background a hand moves around sketches and numbers and things and in voice-over you get some more information). And they found that this wasn’t complicated, didn’t take more time than the usual texts and they said they had fun doing it. Someone even thought about how this might be useful when writing job applications, because it seems to be a lot more real then just writing verbal texts like a business letter or a media release.

In the end I asked them again to evaluate their motivation and they thought that it was about the same as in the beginning. As sad as that might seem it actually is a huge step: Usually motivation dropped from medium to next to zero. So I would say that Scrum improved this module a lot. We’ll have to see about the final grades now, but I am quite sure they did well.

In the next post I will reflect on what I’ve learnt about working with Scrum and how I think it could improve a lot of environments outside IT.

diving into a new quality of collaboration through communication on eye level: purpose – motivation – commitment